skip to main | skip to sidebar

the art history of cellulite 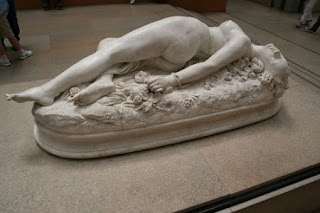 1920 was a good year for modernism. Proust won the Goncourt. Lawrence published Women in Love. Tristan Tzara arrived in Paris. Paul Klee was given a teacher’s appointment at Bauhaus. And Alquier and Paviot, two French scientists, published a paper on a phenomenon that they called “cellulite”.

I’ve been thinking of cellulite, lately, due to a blogging double play. First, IT wrote a post about a book she is reviewing, Woman as Design by Stephen Bayley. She quotes Bayley on the bum:

“A muscular system is required both to move and stabilize the hip joints. This system is to be covered by twin fleshy parts whose function is partly to act as a cushion and a cover for the gluteal muscles and the pelvic bone, but mostly to serve profound symbolic purposes. This part of the body is identified with locomotion, but also with reproduction and excretion. But this symbolism must not be explicit. Instead, it must be adapted to different cultural and social circumstances.”

Upon which she comments:

”Frankly, I just use mine for sitting on, mostly, but I suppose it could also serve 'profound symbolic purposes' if there were a significant dearth of meaning in the world.”

Ads without Products picked up on IT’s theme, and added to it by mentioning a sculpture by Baudelaire’s friend, Clésinger, la femme piquée par un serpent, exhibited in 1847. AWP quotes an account of the statue by Pingeot – I presume Anne Pingeot:

“Clésinger’s Woman Bitten by a Snake, a succes de scandale . . . ensured its creator’s notoriety at the Salon of 1847. The scandal surrounding the work was orchestrated by Theophile Gautier, who spread a rumour that the cast for the statue had been taken from life. The model was Apollonie Sabatier, called ‘camp-follower of the fauns’ by the Goncourt brothers, but by Baudelaire ‘the beautiful, the good, darling’, ‘a guardian angel, muse, Madonna’ and ‘girl who laughs too much’. This notorious work exerted a lasting influence. Sculptors began making the female body more curvaceous and languishing, but omitted the cellulite rippling above Mme Sabatier’s thighs that had lent credence to the live-casting rumour. ‘A daguerreotype in sculpture’, wrote Delacroix, in his journal for 7 May 1847. However, the tide of realism was arrested by subsequent titles for nudes. They were called Sleeping Hebe (Carrier-Belleuse) Eve after the Fall (Delaplanche) and Young Tarentine (Schoenewerk). Mathurin Moreau’s Bacchante continued this series late into the century.” — Pingeot, Musée d’Orsay, p. 45. “

Now, I suppose the intent, here, is to disrupt Bayley’s bum reverence by introducing the rough texture of life – that rough texture being cellulite. However, I objected on AwP’s site that, far from being the rough texture of life, cellulite is a thing that, in the Anglosphere, we’ve only learned to “see” since the late seventies. In ordinary life and in science, in fact, there is no set, moored thing called cellulite. And to project Alquier and Paviot’s invention back to the 1840s is historically inaccurate.

All of which made me ponder the status of cellulite. Since much of the theory web is taken up, at the moment, with speculative realism, cellulite might be an excellent place to start speculating. Since, after all, it should be clear what cellulite is. We can see it. We claim we can see it. Billions of dollars are spent each year to cure it. Thus, it has as objective an existence, in our social life, as, say, measles.

Yet, even a cursory look at the scientific literature shows that cellulite – or so called cellulite, as it was called in the early eighties – seems to have no canonical scientific status at all. There is even a geographic division about cellulite, between the “Europeans” and the Americans (the British, by now, are included in the American tail – a sort of moon of America) (there is no way to write about ass without having the wild urge to pun, so I make no apologies for using moon, tail, and other bottom listing words). Alquier and Paviot’s discovery is, like Tzara’s poetry or expressionistic film, still within the caul of unmeaning.

“In the first description of the disease, Alquier and Paviot (1920) described a non-inflammatory complex cellular dystrophyof the mesenchymal tissue caused by a disorder of water metabolism, which produced saturation of adjacent tissues by interstitial liquids.The dystrophy was thought to be a reaction to traumatic, topical, infectious or glandular stimuli.”

Two things are noticeable, here. One is that it is called, without precondition, a “disease”. And the other is that the emphasis is on liquids, not fats. In fact, this is at the center of the Euro-American squabble about cellulite – Americans insisting that cellulite is a normal condition, not a disease, and confusing the issue, in the eyes of European dermatologists, with the introduction of fat. In fact, the first English usage of cellulite recorded by the OED is in a book about France from the 50s explaining that la cellulite is “puffy”. It was liquid-y before it became clott-y. It was once like a bubble filled with water, now it is like cottage cheese. The metaphors in place today about cellulite are much different than those in the 50s. But, in the fifties, in the Anglosphere, nobody was seeing cellulite.

Before I get to what I can possibly mean by that, let’s look at another paper on cellulite,

Terranova, Berardesca_ and Maibach 2006 Cellulite: nature and aetiopathogenesis, in which the three dermo scientists list three very different meanings of the term:

“Over the last few decades, three major conflicting theories have emerged in relation to the ethiopathogenesis of cellulite. These indicate, respectively, the following causes:
1. Oedema caused by excessive hydrophilia of the intercellular matrix.
2.A homeostatic alteration on a regional microcirculatorylevel; this pathogenetic theory is summarized
in a synthetic and self-explanatory denomination: EFP.
3.A peculiar anatomical conformation of the subcutaneous tissue of women, different from male morphology.”

Which gets us back to Clésinger’s statue. There are a few characteristics of cellulite that stand out from the scientific and ordinary language descriptions – one of them being that cellulite is a stable thing. It is not the effect of a motion, like a smile, but rather a condition. Pingeot’s description of “rippling cellulite” is an attempt, of course, to straddle this distinction. But in fact, the viewers at the time saw either fleshiness, or the effect of torsion. The latter is important, for the scandal of the statue was that the woman’s throes were more characteristic of fucking than of poisoning – a well circulated piece of gossip was that the bronze snake, now lost, that was twisted around the model’s ankle was an afterthought. The model was Apollonie Sabatier, later Baudelaire’s lover. Here is how Theophile Thore saw the statue in 1847:

“What snake has bitten her? How she twists (se tord)! How her beautiful flanks move and lift into superb reliefs! (comme ses beaux flancs s’agitent et soulevent des reliefs superbes!)”

Of course, we know what “snake” has bitten her –but the superb reliefs in question are obviously, for Thoré, the result of her twist. Since it was said that Clesinger more faithfully adhered to the body cast of the model when sculpting the marble, others remarked – often scornfully – that this was applying the daguerrotype method to sculpture. A well known critic, George Planche, made that comparison, and Delacroix noted in his journal, “Planche is right: it is a daguerrotype in sculpture.” [Buerger, 49]

(I note here a Lamartine – the presence of the snake around the ankle, attested by some sources, is disputed by others. Buerger writes that Clesinger refused to put the snake around the ankle, which would have made the statue refer to Cleopatra. Susan Waller claims the snake is now lost. If there was not a snake, Thoré’s remark – what snake has bitten her – would be less lubricious. Don’t ever think the past is easy.)

Our point, of course, is that deciding about the status of an ‘object’ like cellulite does remake the past. Because what we see and what is there seem to so overlap, seem identical, we begin to think that what we are taught to see was always there, too. And yet, not only do scientists point at different things when they point at cellulite – the descriptions of the flesh of the past give us divergent pictures, as well. There’s a certain positivist satisfaction in thinking that we will apply our scientific discoveries to the past and show what it was all about – Romans suffering from lead poisoning, Europeans, buggy with microorganisms from their livestock, decimating all the Calibans on all the Bermudas ever found. These stories may even be true, but it is truth that comes with very detailed cautions to the user.
Posted by Roger Gathmann at 10:01 AM

I always think of Collingwood when I think about the way that the work of history discovers, analyzes, and employs its objects, its data:

"Historians certainly think of themselves as working from data; where by data they mean historical facts possessed by them ready made at the beginning of a certain piece of historical research. Such a datum, if the research concerns the Peloponnesian War, would be, for example, a certain statement of Thucydides, accepted as substantially true. But when we ask what gives historical thought this datum, the answer is obvious: historical thought gives it to itself, and therefor in relation to historical thought at large it is not a datum but a result or achievement. It is only our historical knowledge which tells us that these curious marks on paper are Greek letters; that the words which they form have certain meanings in the Attic dialect; that the passage is authentic Thucydides, not an interpolation or corruption; and that on this occasion Thucydides knew what he was talking about and was trying to tell the truth. Apart from all this, the passage is merely a pattern of black marks on white paper: not any historical fact at all, but something existing here and now, and perceived by the historian."

JCD, nice quote. I don't know Collingwood very well. What would you recommend?

I don't know all that much of him myself, but the Idea of History is pretty good, especially the "Epilegomena" section.

i liked this, it works.

that statue is in the d'orsay, right?

i'm completely, completely serious: i once masturbated *in the museum* to that statue. in the bathrooms downstairs.

yes, i'm old and gross, but What Would Foucault Say?

Well, it would depend, anonymous, on if he was in the stall next to you.

wait. i found something perfect today!

North, has there ever been a day when you haven't found something perfect? You are a sorceress-bricoleur!

i finally added Rousseau & was looking for the best link:

a bricoleur? is that a good thing? i hope.

North, of course bricoleur is a good thing! Bricoleuse, I was going to write, but that doesn't seem right. Anyway, I don't throw bricks at you - you throw them at me. I'm krazy kat, you are ignatz. You can study this scientific diagram for more details:
http://www.youtube.com/watch?v=X2WKDp51sSQ&feature=related

hey! that's me and you! i want royalties. i'm rich i tell you, rich!